This week we played  Cestria, Pelton Community and St. Cuthberts' Primary Schools.  We think we should have won all of our matches however we were unlucky as we conceded seven goals and most of them were 'worldies'. Mr Burns and Mr Hunter were our managers this week; we missed Miss Howells as we think she is our lucky mascot!

WGPS v Pelton Community 1-2 (scorer: Felix)  One of their players was sent off for kicking the ball away and fouling!

Last week we played at Bullion Lane; we won all of our games and played well as a team.  We passed the ball around a lot and didn't give away possession often.  It felt a lot easier to play this week as we played outstandingly, especially with our sportsmanship.

The squad this week remained the same; Miss Howells and Mr Burns came with us this week.

In our first game we lost 2-1 against Edmondsley. In the second game we lost 2-1 against St. Josephs. The last game we played we finally pulled together as a team and we won 6-0, Joseph and Ben scored 3 goals each. As a team we feel we didn't play as well as last week but hopefully we will learn from our mistakes and try to play better next week. Unlucky, Witton United.

Next week we're playing at Bullion Lane, we'll update the blog again with our scores and results.

New squad and new players.... the return of Witton United!

This year Mr Burns, Mr Hunter and Miss Howells held trials for the football squad.  The children who were selected were: Joseph Kirtley, Ben Herdman, Leo Truby, Logan Palmer, Sam Myers-Smith, Joseph Turner, Joe Poole, Felix Scott, Lewis Renwick and Noah Cranston.  There are year 6 and year 5 pupils playing, with a stand-by list ready to step in if we need any reserves.

Last night our first round of games were held at Langley Park Primary School. The first team we played was St. Margaret's Primary School, we drew 1-1 and Ben Herdman scored our goal.  Our second match was against Cestria Primary School (apparently they were the nearest rivals to our team last year; so we need to try hard to top that this season!).  We won 2-1, Ben and Felix scored the goals.  Our final game of round one was against Langley Park, we triumphed 6-0 with goals from Joseph Kirtley, Joe Poole, Sam Myers-Smith, Leo Truby and Lewis Renwick scored 2 goals.

We think that leaves us in a strong position after the first round and we're proud of our efforts!  Our teachers were very pleased with our sportsmanship too.

We Won The Cestria Cup!

This week, Witton United FC won the Cestria Cup! In the finals, played the following teams: St. Bedes, which we won 3-1, Woodlea, which we won 2-1, and in our final game (for the title) against St. Josephs we drew 1-1. It was a great game and we ended wining the Cestria Cup by the narrowest of margins - goal difference. We only needed to gain a draw however St. Josephs needed to win.

The following people played on this night:

This week was our last week in the Chester-Le-Street league for this year. Our first game was against East Rainton with us once again beating them, this time 7-0 with most of the team scoring . Our next game was against Cestria (which was our toughest game in the season) which we were defeated once again, this time 3-1 but we were winning 1-0  at half time. McKenzie sadly scoring a dreadful own goal. Our final game was against St. Benets which we got beat 1-0. Overall we came 2nd in the 'B' league and received a plaque. WELL DONE YEAR 6 !!!!!

First we played East Rainton and we won 2-1, in our second game we played Cestria, lost 5-0, and in our third game we played St Benets and we won 2-0. Also we are 2nd in the B league and need to beat Cestria to have a chance in winning the league because next week is our last week in action.

This week was once again a great success as we won 3/4 games at Birtley. The first game was a bit of a disaster as we were beat 2-1 from Cestria with the scorer being Jack Iveson.. The next game was against Birtley St.Josephs which we won 5-1. The third game we played was against Langley Park; we won 4-1.The final game we played Ravensworth with us winning 5-0 which was a good score to end the night.

Last week was our first week back in action [also playing at Birtley] and amazingly we won every single game. The games were against  three schools who were Barley Mow, winning 5-1; the second games was against Birtley St.Josephs again winning 5-0; and the last game we won 5-3 against East Rainton.

The people include in both weeks are:

On Thursday 20th October 2016 Witton United travelled down to a community centre in Euston to play football. Our line up was:

During the match against Belmont they scored the first goal which was really unlucky for us but then a bit later in the game Alfie Myers-Smith had a beautiful strike of the ball and it appears in the net.

Just before half time they player slides strait in to Alfie Myers-Smith and he is really lucky that Alfie didn’t get injured. In the second half they score another goal at the match score finishes at 2-1 to Belmont.

In the second game we played Euston primary school. Our line up was:

At the beginning of the game we won the toss! Alfie Myers-Smith (our captain) chose to give us kick-off. Strait away we went on a great attack! Unfortunately they were able the offense. Somehow they pulled out a miracle and beat us 2-1… we hope that we destroy them next time!

In our third and final match we won thee game 5-2!

During the match we scored some AMAZING goals!!! Our goal scorers were:

We did extremely well and enjoyed our time. Everyone loved playing football for Witton United!!!

CNS tournament - so close to triumph!

On Monday Witton FC took part in a tournament made by CNS that was exiting and nail biting. When we got there we all had a little kick about that improved our shooting. It was time for our first game and this was our team:

Our first game was against Brandon team it was a very close game but AlfieH put us in front very quickly to make it 1-0 but unfortunately we then drew the game 1-1.

The second game we played a very good team Belmont and were beaten 3-2 that was a very close game. The third game and last game of the group stage was against Brandon B team and we won 4-1. After that is was time for the quarter finals and we played Finchale and lost 1-0 and that was the end for Witton FC. The overall winners were Brandon.

This week we played at Pelton,  Alfie-Myers Smith scored a fantastic free kick, also he was our top goal scorer, scoring four great goals. We persevered through the heavy rain which kept started and stopping through  the night. We sadly lost three matches and drew one, the scores were: 1-1 , 2-1 , 3-2 , 2-1 . There were  lots of moments where people were gasping because of how close some of our team's shots came to the goal. this weeks man of the match was Alfie-Myers for being an amazing centre midfield. Luckily this week we had no injuries. On Monday the 17th October our team will be on our way to Brandon at about three P.M for a tournament which we will have lots of fun at. We will hopefully be coming back next week with some good results.

For the first few matches, we won 2 and we drew 1. We won the first game 5-2 then we won the second match 2-1 and our last game we drew 0-0. A team from Stanley didn't turn up so we only played three games! Alfie Myers-Smith was man of the match and Alfie Hart was Top Goal Scorer.

This week we played our matches at Bullion Lane Primary School.  On the second week we lost 3-2 against St. Bedes, drew 0-0, we won 6-0 and we won 4-1. Alfie Myers-Smith was Top Goal Scorer (with a magnificent 8 goals!) and Tom was man of the match.

On the third week, Alfie Myers Smith was injured and Dylan Dawson acccidentally scored an own goal.We lost 3-0, 5-0, 4-1 because we didn't defend as well as we could have, we tried our hardest though.  The best bit about this week was that we wore our new kits; the look like Inter MIlan's blue and black home kit.

Due to the rain causing waterlogged pitches on Thursday we sadly didn't get to play at Red Rose Primary School; we were devastated. We may start doing training if this continues - we may get new goals for our outdoor area if we play regularly. We would have had a few great games if it hadn't been cancelled so it was a real shame!

On Thursday 3rd March the year 6 footballers took part in a set of matches at St. Benet's Junior School in Chester Le Street where we played three different teams.  Playing exceptionally well, we drew our first match and lost the other two.  Our amazing team played with enthusiasm, commitment and excellent teamwork and we kept our heads high despite the poor weather - it was pouring down!   The final results concluded at 2-2 , 2-1 and 4-1. Every week in assembly a 'person of the match' is announced and this week the award was given to Alex C, our left winger, who scored a tremendous goal.

We love playing football every Thursday and can't wait for the fixtures next week!

Preliminary round... our first few matches.

Our opponents in the first few matches were teams from St. Bedes, St. Margarets, Pelton Roseberry and Lumley Juniors. We successfully scored a goal in every game during this round, Finn is becoming our tactical mastermind and we won the last few games we played.  Morgan scored a hat-trick against Lumley Juniors (three goals in one game), he was one of the star players.  Other star players so far this term have been Rebecca, Alex C and Finn.

We want to say thank you to Miss Howells and Mr Hunter for helping coach our team.  Our league is having a winter break and we will play more matches in March.

Morgan, Finn and Lila (working with our supporters Emma, Jasmin and Isabelle). 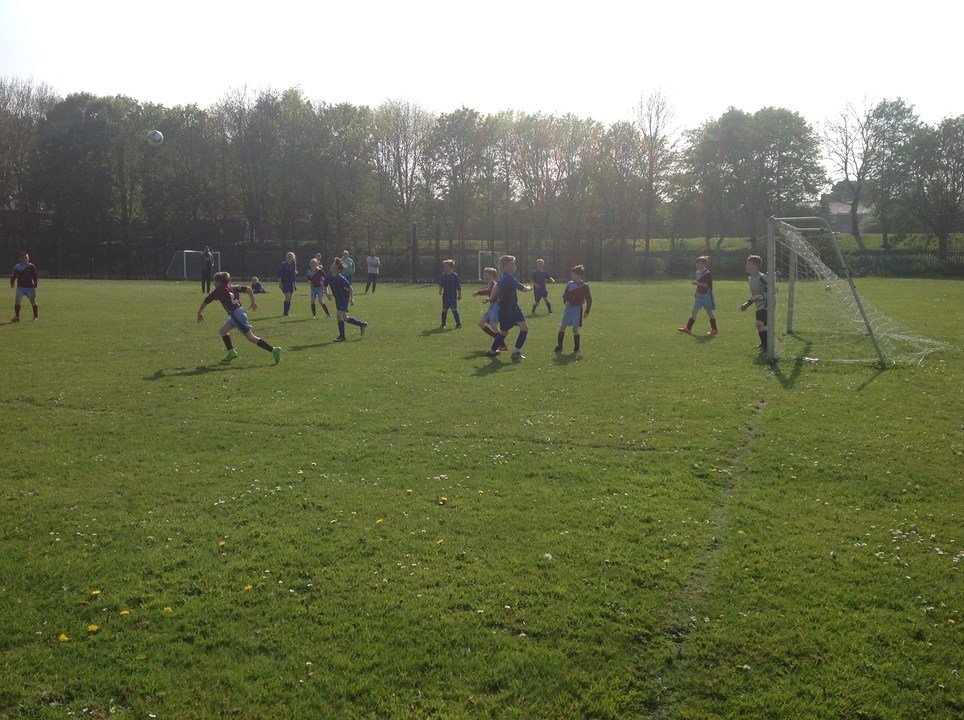 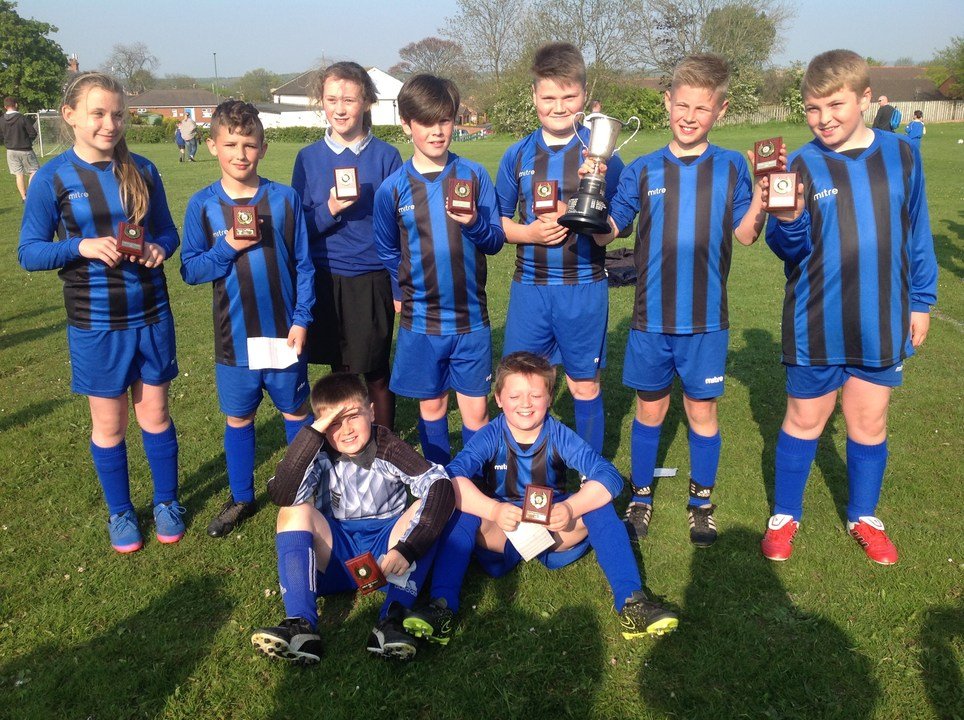 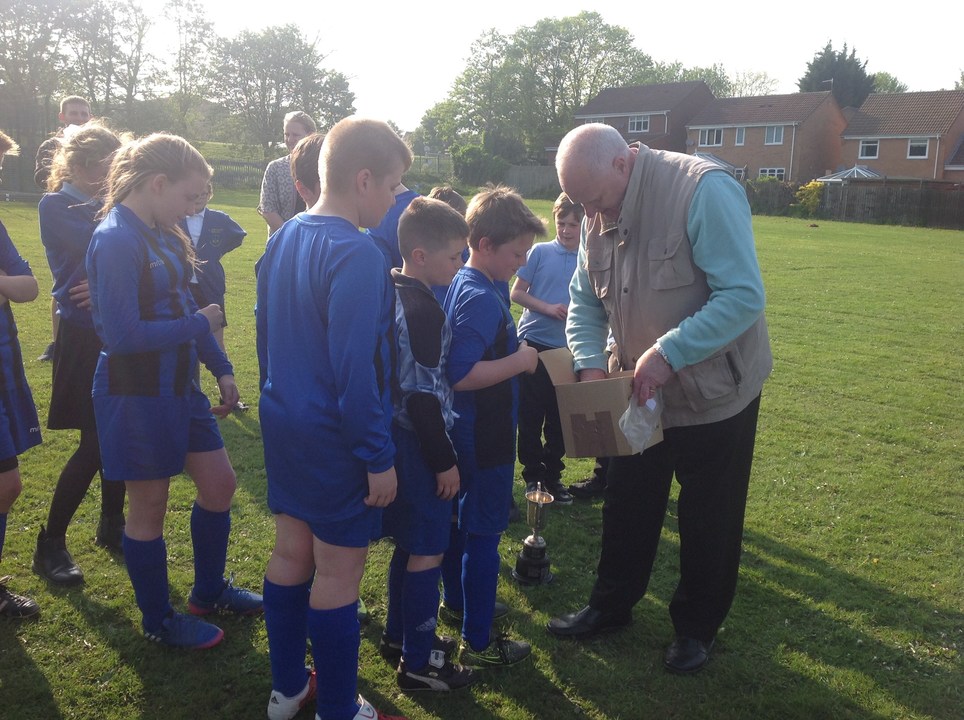 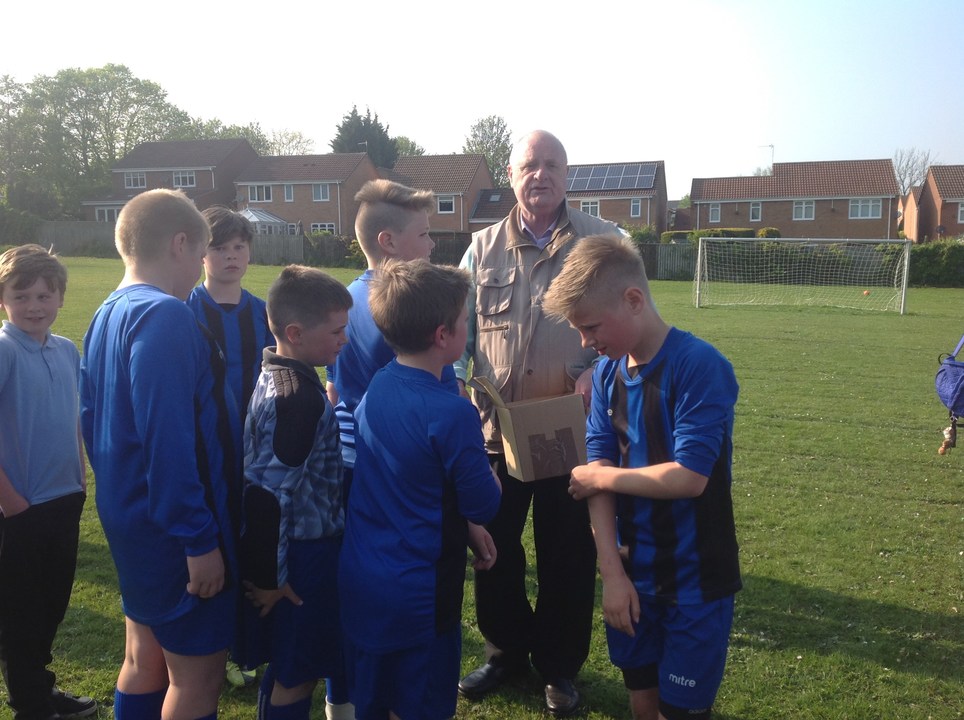 All the latest news about Witton United FC, our school football team.

We won the Cestria Cup final! Well done everyone on the team.

Great News! We made it to the  B' League Play Off in the Chester - Le - Street FA and we came second! Well done!

Fixtures can also be found on this website http://www.chester-le-streetschools.org.uk/football/schools/index.htm

We will also took part in a football tournament, The Brandon Cup, on Monday 17th October 2016.